Please see full of my post with pictures in newsletter from here.

I worked at Narok Water and Sewerage Services Company Ltd (NARWASSCO) in the Republic of Kenya from April 2014 to September 2016. My assignment place is called Narok Town which is on the way to Maasai Mara National Reserve. The population is about 50,000, it is the multi- tribal town. The half of population is Maasai people, the others are mixed several tribes.

NARWASSCO is a water services providers (WSPs) of private company in Kenya, They contract the management of water service with Rift Valley Water Services Board (RVWSB). JICA carried out a grant aid project for augmentation of Narok water supply from February 2014 to April 2016. Now NARWASSCO has new water treatment plant (North WTP, 4,000m3/day) and new distribution pipes, so situation of water is much better.

Narok town has another old treatment plant (Central WTP). Central WTP was built by Britain in 1940s when Kenya was the British colony. Although the design capacity is 1,000 m3/day, NARWASSCO produced about 2,000 m3/day before JICA project to meet the high water demand. Of course, the quality of water was not good, and there were a lot of leakages anywhere. Non-Revenue Water Ratio was about 40- 50% in Narok.

My activity was to cooperate to map the distribution network by GIS, then to improve the data management by GIS data. JICA had procured Trimble GPS and ArcGIS through NRW project before, but they had never used equipment after JICA experts left. Those licenses were already lost when I came to NARWASSCO. So, my first job was to recover licenses of GPS and ArcGIS through ESRI Eastern Africa office.

After that, I started to map distribution network with my workmates in fields. NARWASSCO supply water to 2 towns – Narok town (3,000 connections) and Ololulung’a town (500 connections). I spent about 6 months in each town to complete mapping. The total length of distribution and service pipe is about 300 km, it was not easy to map those network under very strong sunshine of Africa. When I was mapping, I found a lot of complicated network like spaghetti. Because every field officer has different knowledge of fields before, they sometimes installed very long service pipe from distribution pipe. For example, 15 mm’s small pipe supplied water to 20-30 connections. Those house connections had never got water since installation for several years. Then, I found a lot of illegal connections and officers’ corruptions in the fields. I thought how they can solve those situation through GIS. I thought it will be better if our officers can access to map of distribution network easily. Then, I created web-based GIS application for NARWASSCO. But they did not use my application to see map, so I created other function to link billing system from GIS. Since then they started to use my GIS application to share distribution map.

The other important job was the way to establish GIS firmly in NARWASSCO. There was no GIS officer when I worked. I found an attachment at town planning office of Narok county government. I knew he has good skill of GIS. I recommended managing director of NARWASSCO to employee him. Although it took bit time to employee him because his tribe is not majority, he was employed in August 2016. I rushed to teach my all knowledge and skills for 2 months, before leaving Kenya.

Except NARWASSCO’s job, I went to observe 14 WSPs in other towns. Especially, observation of Nyeri Water and Sanitation Company (NYEWASCO) was very exciting experience for me. NYEWASCO is the best WSP in Kenya. Their NRW is 15% on average, sometimes it was less than 10%. They set about 200 DMAs and 10 staff for NRW work. The materials and equipment for repairing were inventoried properly. When a leakage found, they can go to repair immediately even at night. After observing NYEWASCO, I thought NARWASSCO also can do the same things as NYEWASSCO because they are same Kenyan.

I want to write about life of Kenya now. The life of Narok was quite comfortable for me. Since the elevation is about 1,900m, sunshine is very strong, but temperature is 12-28 degree, and climate is like spring all year around. Fortunately, I found very nice house which has water anytime. There are 2 supermarkets in Narok, so I could buy most of necessary items. When I went to Nairobi – capital city of Kenya, I also could buy Japanese foods. In weekend, sometimes I walked about 20 minutes to watch wild zebra baby.

Narok’s majority tribe is Maasai people, so I learned Maasai language from my teacher. Though he is 85 years old, he is very active, and went to take care of patients as a Maasai traditional doctor. Most of my workmates are also Maasai, so sometimes I visited their home. The life of Maasai is very simple. Their main food is milk from cow. They take blood with milk for taking vitamin and iron. They normally do not eat meat nor vegetable. Maasai people live with cow.

Their daily life starts from taking milk. After milking, they go to savanna to take care of cows until sunset. There is no electricity and water in Maasai village. I cannot forget the beautiful stars and lightning bugs when I saw at night in their village.

My 2 years and 6 months stay of Kenya was unbelievable experience for me. That experience taught me interesting of water jobs. Now, I am working at water and sanitation sector for developing countries as consultant. I want to make full use of my experience of Kenya for other countries. 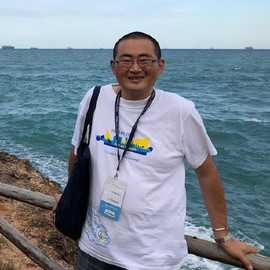 I am skilled GIS engineer, especially am interested in GIS for water management.